Salvador, the capital of Brazil’s northeastern state of Bahia, is known for its Portuguese colonial architecture, Afro-Brazilian culture, and a tropical coastline. The Pelourinho neighborhood is its historic heart, with cobblestone alleys opening onto large squares, colorful buildings and baroque churches such as São Francisco, featuring gilt woodwork.

Why tourism is important: 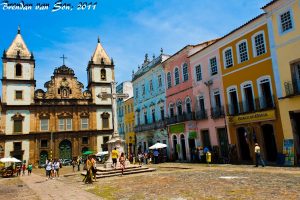 Salvador da Bahia has an energy and unadorned beauty that few cities can match. Once the magnificent capital of Portugal’s great New World colony, Salvador is the country’s Afro-Brazilian jewel. Its brilliantly hued center is a living museum of 17th- and 18th-century architecture and gold-laden churches. More importantly, Salvador is the nexus of an incredible arts movement. Wild festivals happen frequently, with drum corps pounding out powerful rhythms against the backdrop of colonial buildings almost daily. At night, capoeira circles form on plazas and open spaces, while the scent of acarajé(bean and shrimp fritters) and other African delights fills the evening air. Elsewhere in town, a different spirit flows through the crowd as religious followers celebrate and reconnect with African gods at mystical Candomblé ceremonies. In fact, there’s no other place in the world where descendants of African slaves have preserved their heritage as well as in Salvador – from music and religion to food, dance and martial-arts traditions. Aside from the many attractions within Salvador, gorgeous coastline lies right outside the city – a suitable introduction to the tropical splendor of Bahia.

As one of Brazil’s 12 host cities in the 2014 FIFA World Cup, Salvador had has undergone significant changes in recent years, including the development of pedestrian-only promenades in Barra and the construction of a useful (if limited) Metro line, not to mention the inauguration of Itaipava Arena Fonte Nova football stadium. Thanks to the influx of international tourists, public transportation options have improved – and there’s an affordable and user-friendly shuttle running between the airport and the city.