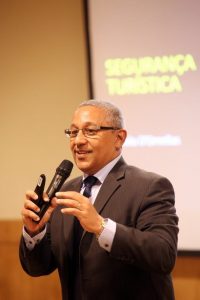 Camilo D’Ornellas is Director for the Rio de Janeiro’s Civil Police “Training Center”(Centro dos Estudos) and is the Security Training Coordinator for the World Cup and the 2014 Confederation Cup.  D’Ornellas is a well renowned educator and tourism security practitioner.  D’Ornellas specializes in major event security and has worked not only in this capacity in Rio de Janeiro but also throughout Brazil.  He has worked for many years as a security coordinator for major events such as “Rock in Rio”.

D’Ornellas has dealt with both security matters and event security not only in Brazil but also throughout South America and Europe.   Among the many famous people who have come utilized his protection services are: Paul McCartney, Madonna, Björk, Elton John, Paul Simon, Backstreet Boys, Jamiroquai, Rihanna, Rolling Stones, and Red Hot Chilli Peppers  He has worked for over a quarter of a century in police matters and is also a specialist in anti-kidnapping and tourism security.

D’Ornellas has testified before the Brazilian congress and is playing an essential role in Brazil’s preparations for the 2014 (soccer) world cup games and the 2016 Olympic games.  D’Ornelas has taught numerous courses to police officers around Brazil, and brings to his classes a sense of purpose, professionalism and caring.  In 2012 D’Ornellas received the coveted Medal of Faithfulness (Medala da Fidelidade)  as recognition for the service tat he has shown to the people of Rio de Janeiro for his caring and dedication to the security of the people of Rio de Janeiro.

D’Ornellas is a graduate in Law (1986) from the University of Estácio de Sá.  He has also studied Criminal Justice and Public policy at Federal Fluminense University.  His post-graduate education is in Public Policy and Criminal Justice (Candido Mende University: 2010) with a specialty in Criminology.  He speaks both Portuguese and English.