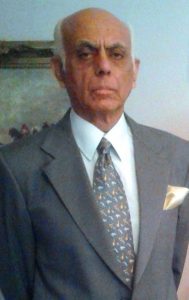 Major General Ashok Hukku , Y.S.M. (Retd) is a former infantry officer of the Indian Army. He has extensive counterinsurgency and operational experience in India and Sri Lanka. He participated in the war of Bangla Desh in 1971.

He was an instructor at the Indian Military Academy. He commanded an infantry battalion in counterinsurgency areas in India and later as a part of Indian Peace Keeping Force in Sri Lanka where he was awarded the Yudh Sewa Medal (Y.S.M.). He has held several General Staff appointments at brigade, division, corps, and army levels.

He was posted as the Military Attache at the Embassy of India in Paris, from 1995-1998, with concurrent accreditation to BENELUX countries.

As a Major General, he commanded a mountain division and participated in the Kargil war of 1999.

After a general staff appointment at the HQ of the Western Army, he was appointed as the Chief Military Intelligence Advisor in the Cabinet Secretariat at New Delhi.

He retired in 2005 and was called as a Centre Director at the National Technical Research Organization (NTRO) in New Delhi. He sought voluntary retirement from NTRO in 2007 and settled down in the city of Pune.

After retirement he has been speaking on strategic issues of South Asia to NATO officers, diplomats and academia on important forums including at the UN HQ in New York, Konrad Adenauer Foundation and the NATO School in Germany, NATO HQ in Brussels, Senat in Paris,and other institutions in Belgium, Kuala Lumpur and Bangkok.

He has also written for the “Defence and Security Alert”, published from New Delhi.