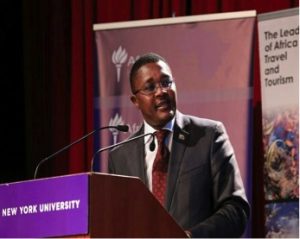 Dr. Walter Mzembi has held various positions in both the Public and Private Sectors in Zimbabwe and Internationally. In February 2009, he was appointed to the position of Zimbabwe’s Minister of Tourism and Hospitality Industry, where he served until his appointment as Minister of Foreign Affairs in October 2017. He retired from public service following the rearrangement  of the Zimbabwean Government in November 2017. He is a former Member of the United Nations World Tourism Organization (UNWTO) Executive Council, and served as  UNWTO Regional Commission for Africa Chairperson comprising all African countries and their respective Tourism Ministers. He capped off his UNWTO stint with a sterling and distinguished campaign for the post-Secretary General of WTO, emerging as the first runner-up to the current Secretary General .

In 2007, he was appointed Deputy Minister of Water Resources and Management. Walter has expertly championed tourism development in his country and advanced tourism policy at the African Union level for its mainstreaming into the AU Agenda 2063 and policy institutionalization after realizing that the tourism sector was missing in Agenda 2063.

A renowned leader of tourism, Dr Mzembi is a recipient of numerous national and international accolades and awards amongst them African Tourism Minister of the Year (2011), Public Service Manager of the Year (2012, Zimbabwe Institute of Management), three times President of the then  New York Based Africa Travel Association (ATA), International Board Member of the Berlin-based Institute of Cultural Diplomacy (ICD), and now it’s President for the Africa Chapter in recognition of his excellence in diplomacy and African politics.   Walter is a sought-after speaker at home and abroad, accredited by the prestigious London Speakers Bureau.

Dr.Mzembi received the highest rating as the best performing Minister in 2014 confirming the 2013 rating in a mass public opinion conducted and endorsed by one of the leading Newspapers in the country, the Daily News Zimbabwe.

Dr. Walter Mzembi was conferred an  Honorary Academician to the European Tourism Academy by the European Council on Tourism and Trade in 2013, a recognition that demonstrates his expertise, innovation, and creativity in transforming tourism for sustainable growth and development.

In January 2015, the New York Times in its publication of the World 52 Must Visit Destinations scored Zimbabwe number 14, citing it as a “Once avoided-Now a must visit” destination, a rating largely attributed to the reengagement, rebranding, and marketing efforts that Dr. Walter Mzembi led with great success.

Dr Mzembi has a passion for tourism and biodiversity conservation management. He has contributed to discourse regionally and internationally on the subject of “Tourism and Biodiversity: Zero Tolerance to Poaching in Africa by 2020” that led the UNWTO commissioning a study on “Towards Measuring the Economic Value of Wildlife Watching Tourism in Africa”, a document available online.

Dr Mzembi is a Registered Professional Engineer with the Engineering Council of Zimbabwe, a Fellow of the Zimbabwe Institute of Engineers and a Member of the Engineering Institute of Zambia. Apart from his Engineering qualifications, he holds a Bachelor of Business Studies degree, Master of Business Administration in Production Management from Azteca University in Mexico and he is a recipient of field research-based doctoral degree entitled “An Exploratory Study of Conservation Management in Zimbabwe: A Governance Perspective” that he attained in 2015 from Aldersgate College, Philippines.

Dr Mzembi oversaw the successful co-hosting of the 20th Session of the United Nations World Tourism Organisation (UNWTO) General Assembly in Victoria Falls in 2013 by Zimbabwe and Zambia, the third time in the history of UNWTO General Assemblies that this has happened on the Africa soil after Egypt and Senegal held them in 1995 and 2005 respectively.

Dr. Mzembi is currently a Global Consultant on Risk analytics and Investment advisory focusing on the  African Continent. He is based in Johannesburg, South Africa.